(Zack Smith (left) and Billy Smolen rock out to “Rosanna” at last week’s big Collage! 2017 fundraiser.  Watch them and the rest of the Rosanna Band perform March 24th with Darryl DMC McDaniels, Mark Goodman, and Rob Fusari at “I Want My ’80s: The Best of MTV’s Early Years.”  Click on the pic for tiks!)

Hey – Our next live Music Biz 101 & More radio show this week is a replay of last week’s pretty amazing interview with Darryl McDaniels, the DMC part of Run DMC.  He spoke of Rap music’s early days.  He spoke of musical networking with guys from Blink 182, Motley Crue, and Joan Jett.  He spoke of learning and growing.  And he pumped up the March 24th show at William Paterson University in which he’ll perform with the student band who rock better than most of us combined.  Give a listen! 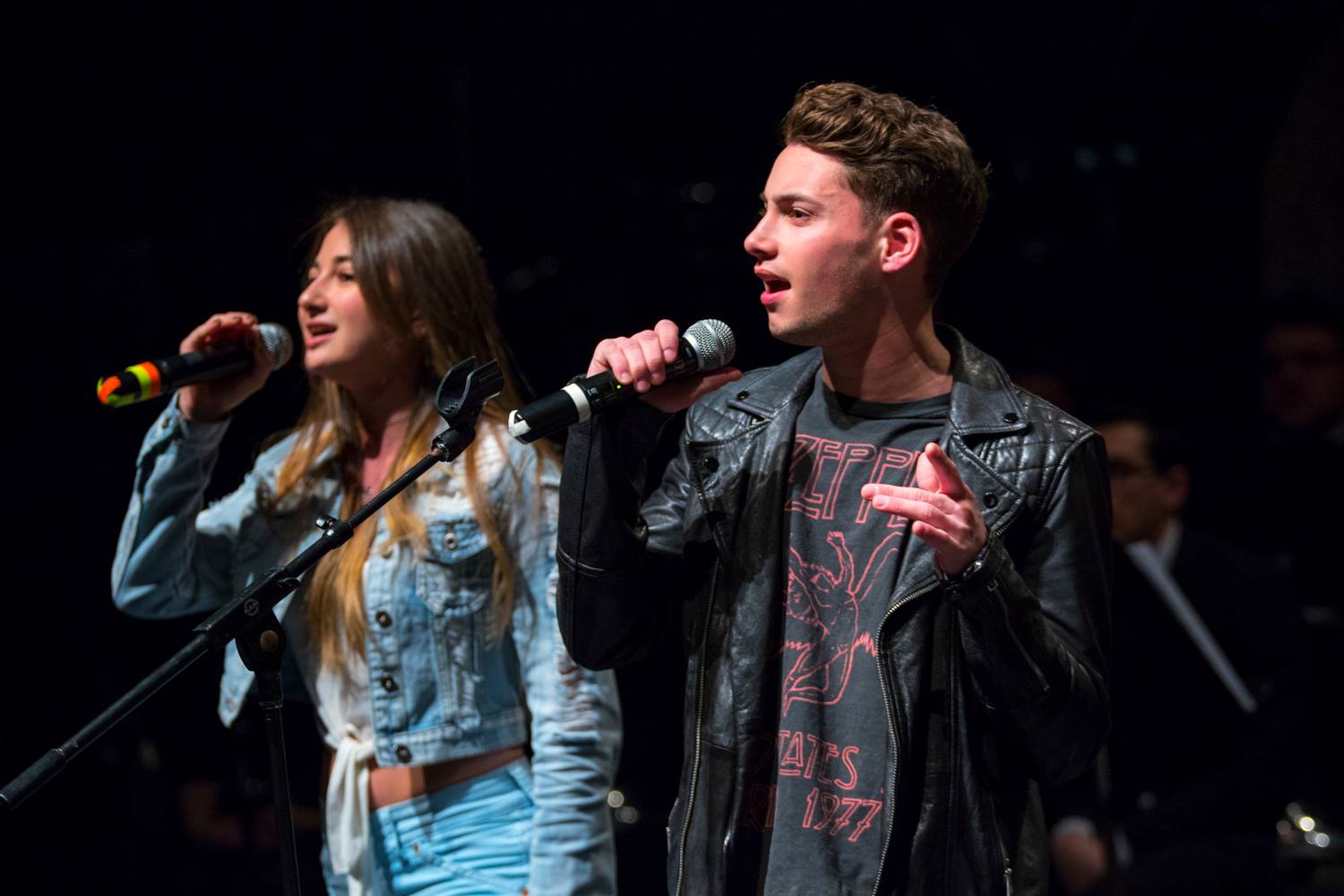 How Coachella Gained Lady Gaga After Losing Beyonce
This is a very interesting article, for more than just the stars in the headline.  Click, read, and take a look at some of the details, such as how Beyonce had booked a block of 90 rooms for the show.  Or how long Coachella booked Beyonce to rehearse on the main stage.  There’s more, so give this a few minutes of your time.

Lionel Richie & Mariah Carey Reschedule Tour Dates – Who Cares?
That’s not a facetious question, the “Who cares?” you see above.  Because, besides fans, there are some people who care very much.  Think about all of the people who work on a tour: the band, the tour manager, the stage crews, the truck drivers, the merch vendors, the publicity people…

A tour is about more than just the headliners.  It’s about the little traveling economies that a tour supports.  When Lady Gaga cancelled a tour a few years ago because of hip surgery, the bigger deal was all of the people who lost summer work because all of the other tours already had hired their “behind the stage” personnel.

So next time you see that an artist cancelled dates, rather than just scoff that they probably couldn’t sell enough tickets, think about all of the folks who wake up scrambling for replacement gigs.  By the way, this is also where networking comes in big time.  Do you understand why?

The 31 Best LinkedIn Tips For Job Seekers
Big ones are including images and video, fill out your entire profile, and avoid buzzwords.  Remember who’s going to read this.  It’s not about you!  It’s about them.

“It’s Easy To Look At Label Deals With Rose-Tinted Glasses.”
Read this interview with Tobe Onwuka, manager of UK-based rapper Stormzy (pictured above).  Like Chance The Rapper, Stormzy and his team have elected to not sign with a label.  While they do have distribution with Warner’s ADA, this interview explains why they’re going about Stormzy’s career in this manner.  And how labels are still important, even if this artist is choosing the alternate route to this point.  Click.

Data’s Importance In The Music Industry
Take a look at these interviews with people in the industry who can explain how important it is to understand the power of data in today’s biz.  Some good stuff here.  Click.

For KISS Fans: The Business Of Your Favorite Band
Listen to these interviews with KISS’s manager, merch company head, and business manager to learn how KISS thinks about their band’s business.  What kind of knowledge can you steal from here?

Everything You Need To Know About Releasing A Cover Song
Going to upload your version of “Shape of You” to YouTube this week?  Does the little voice in the back of your head wonder if you can really do this without breaking any laws?

Click and read and understand what you should really do before posting.  You’re probably not going to do this because you don’t have any money, but at least you know the risks.  What are they?  Click and read ’em.

How To Get Your Music On Pandora – And Then How To Make $$
Here’s some great stuff.  If you write and record original music (or covers too, in this case), you should make it a point to try to get it on Pandora.  But how?  Click on the pic or headline.  Then, to see how you can make money, click HERE.

See why it’s important to read this email every week?