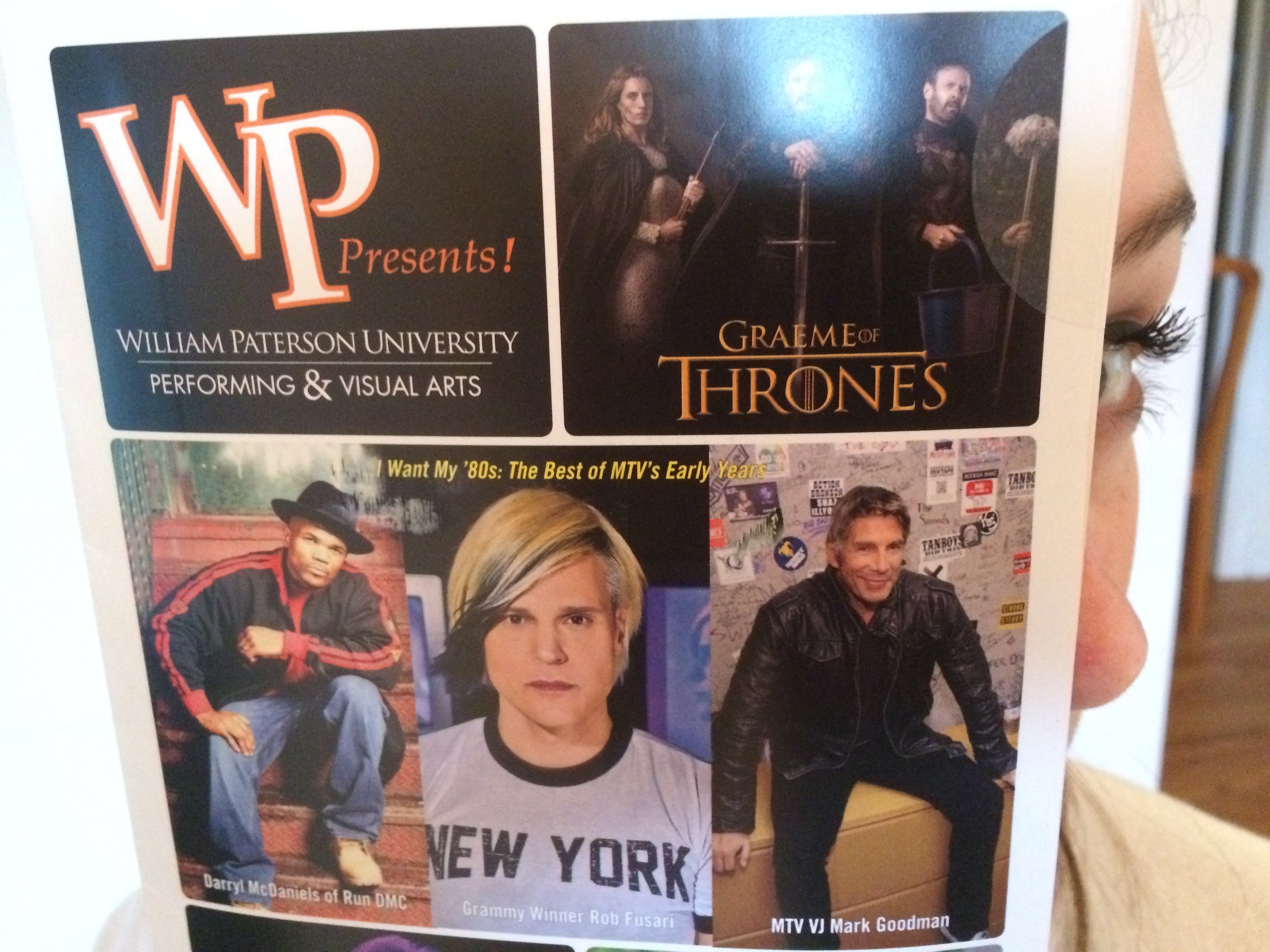 (Here’s my daughter’s left eye.  Oh, and the cover of the spring WP Presents! mail piece featuring our “I Want My ’80s: The Best of MTV’s Early Years” on the cover.  The show rocks your world Friday, March 24th.  You’re going.)

Hey – Our next live Music Biz 101 & More radio show takes place Wednesday, February 22nd at 8pm.  Our special guest will be Dr. Richard Burgess, a big dawg at A2IM.  Know what that is?  If not, look it up HERE.  We’ll ‘splain more about them next week.

Music biz stuff is going on.  Bandcamp went political on Friday, helping to raise at least $120,000 for the ACLU.  If you’re a fan of SoundCloud, this latest lawsuit against them doesn’t help this company that’s allegedly hemorrhaging cash.  Apparently, Beyoncé‘s clothing company isn’t being very nice to its workers in Sri Lanka. And HERE are some predictions for next week’s Grammy Awards. 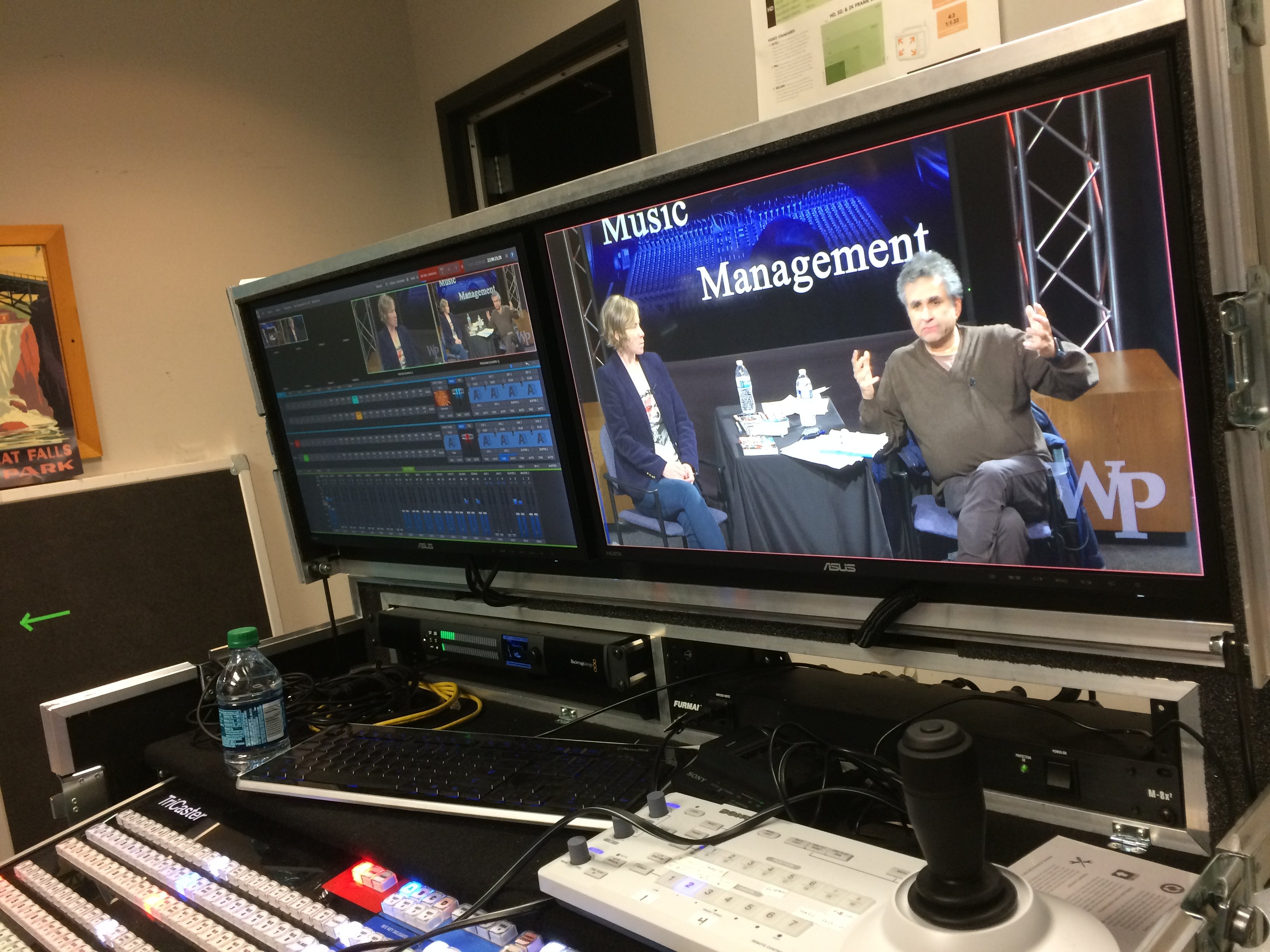 Lori Majewski of SiriusXM and the author of Mad World: An Oral History of New Wave Artists and Songs That Defined the ’80s spoke last Tuesday night as part of William Paterson University’s Music Management Seminar Series.  This is behind the stage, where the filming of the event took place.  Next up in the series, author Chuck Granata on February 21st.

4th Quarter’s #1 Song Owned By 3 Publishers
If you’re a songwriter, you should click and read this.  It’s not only important to be aware of the top publishers in the business, it’s also important to know that hit songs take more than one, or two, or five songwriters.

“Closer” by The Chainsmokers was written by 6 humans.  This week’s #1 song on the Billboard chart, “Bad and Boujee,” needed 5 humans.

It’s a collaborative business.  How are your people skills?

How Performing At The Super Bowl Affects An Artist’s Fanbase
This article looks at the 2013 through 2016 Super Bowls and looks at YouTube subscriber growth and view increases.

Even more interesting is THIS ARTICLE about placing songs within Super Bowl commercials.  Great interview with Universal Music’s Tom Eaton, the SVP of Music for Advertising.

Read This Before You Ask Someone To Coffee
Found this on LinkedIn.  You should go to their newsfeed often.  There’s great stuff there.

If you’re into networking, asking somebody if you can buy them a cup of coffee is a great way to get a meeting.   But then what?  And after it’s over, another “then what” comes around.  This article is spot on with suggestions.  I urge to read this twice and follow its advice.

CBS Radio/Entercom to Merge Creating 244-Station Industry Giant
Why is this important to you?  Because radio is STILL a huge driver of music listenership.  You personally may not listen to radio much, but tens of millions of people do, so understand that part of the biz.

Is Facebook Trying To Screw The Entire Music Industry?
Did you know that every time you see a video on Facebook with music playing, the social media platform apparently isn’t paying any royalties or licensing fees for the use of that music?  Read this for more detail.  You’ll hear a lot about this in 2017.  Stay tuned.

Is It Too Late To Learn Music Theory?
The answer is no.  It’s never too late to learn anything (unless you’re falling from the sky wondering if you should have taken parachute lessons first).  Click and read this.  ‘Tis a good one for ya.

This podcast ties in to our top story about, about the number of songwriters needed to craft a hit song.  Give a listen.  Like Coca-Cola, it’s the real thing.