At the end of last week, Billboard released its Power 100 list of the industry’s most important people.  Depending upon your point of view, creating this list, or at least the top 10, could be pretty easy.  Or incredibly difficult.  Their top 10:

What do you notice?  If you go by the lead name at each number, see how the list is very male heavy (and maybe these males are overweight, too).  In fact, the closest we get to a female on this list is #9 and Atlantic’s Julie Greenwald.  To be fair, in the Spotify, Apple Music and final Universal Music categories, each has a woman listed.  So it’s not like the ladies are completely shut out.  Yet, we still see that the industry is run by dudes.

I had a conversation with somebody the other day who had been an agent until very recently with one of the big six talent agencies.  I mentioned that WME Nashville (WME is William Morris Endeavor, a leading agency) had just announced the promotion of three women to agent.  He said this, “I’ll be more impressed when women are hired as agents in LA and NYC offices, for some reason the big talent agencies have most of their female agents in Nashville.  It really is a boys’ club, and a pretty misogynistic one at that, I’m sorry to say.” 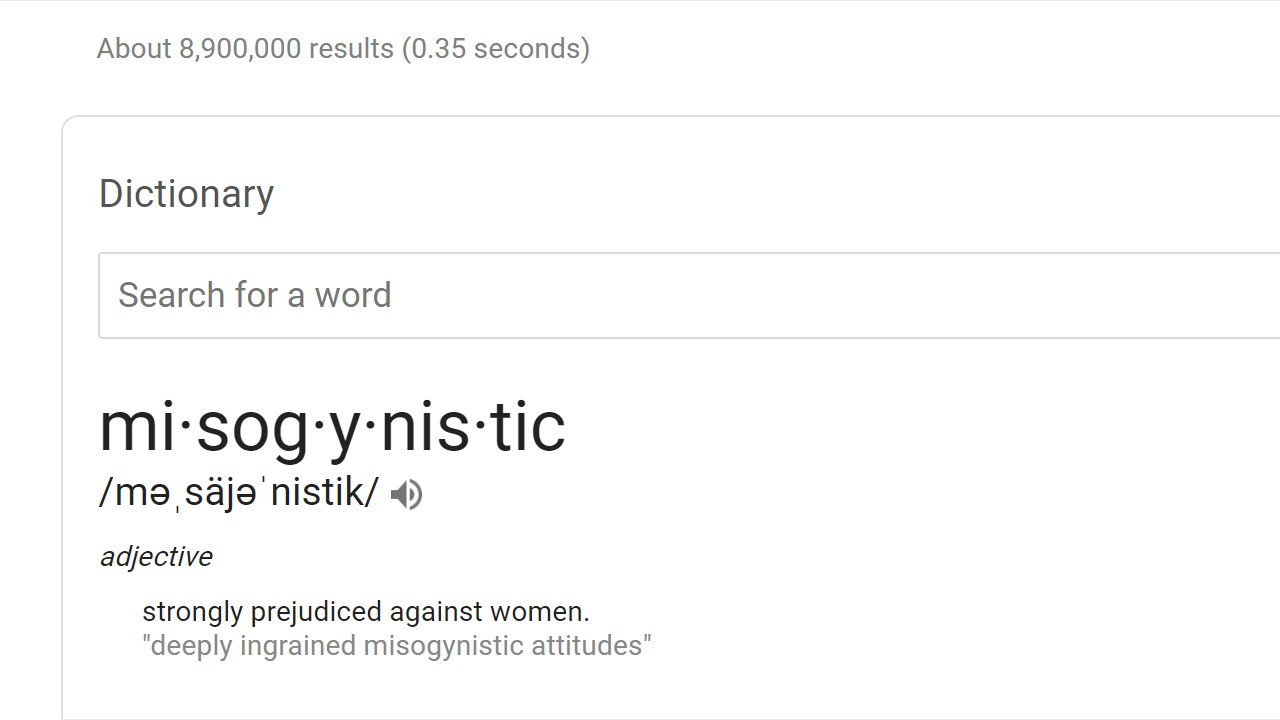 We have a male-dominated list.  These males are also largely (back to them potentially being overweight) white guys.  In fact, of the ten slots, which we’ll again stress are ten slots led by men, nine of the ten are men with skin of a pinkish tint.  Jon Platt is the only African-American on the list.  What does this mean?  I don’t think it’s necessarily a criticism by me of Billboard.  I think it’s more a statement about the higher echelons of the industry.  Did you see the report from Goldman-Sachs this past week?  It is bullish on the music industry.  And, according to the analysis from Forbes writer Kori Hale, “Currently music streaming sales are dominated by top R&B and hip-hop artists such as Drake, Kendrick Lamar, The Weeknd, Migos and Cardi B. Music publishers and labels also stand to profit greatly from the rise of streaming, led by black listeners who are the largest user group.”

If you look at a typical day on the Spotify Top 50 chart, you’ll notice that 8 of 10 (but probably 9 of 10) tracks are hip-hop or a mashup of hip-hop and R&B.  (Today’s chart (02.10.19) is skewed because Ariana Grande’s new music accounts the Top 11 spots on the chart, yes that Ariana Grande, the one we won’t see on the Grammy’s tonight.)  Forbes’s Hale is correct.  We have an industry in which its most popular genre is based in black culture.  Yet it’s run by white dudes.  Smells a lot like the 1950s and ’60s, doesn’t it?

That said, I don’t want you to think I’m calling Billboard racist or any of the dudes on their Top 10 racists.  The point is merely that they are white and the industry’s most popular music is not.  If they were racist, don’t you think they’d be pushing Michael Buble to record his own version of Meek Mill’s “Going Bad” and feature Blake Shelton?  No, this isn’t like Pat Boone recording a white-washed version of “Ain’t That A Shame.”  The culture and the music are respected.  The reflection at the very top of the office building suites just needs to catch up.

Not everyone was happy with this list.  For example, take a look at this tweet from Marcie Allen of MAC Presents: 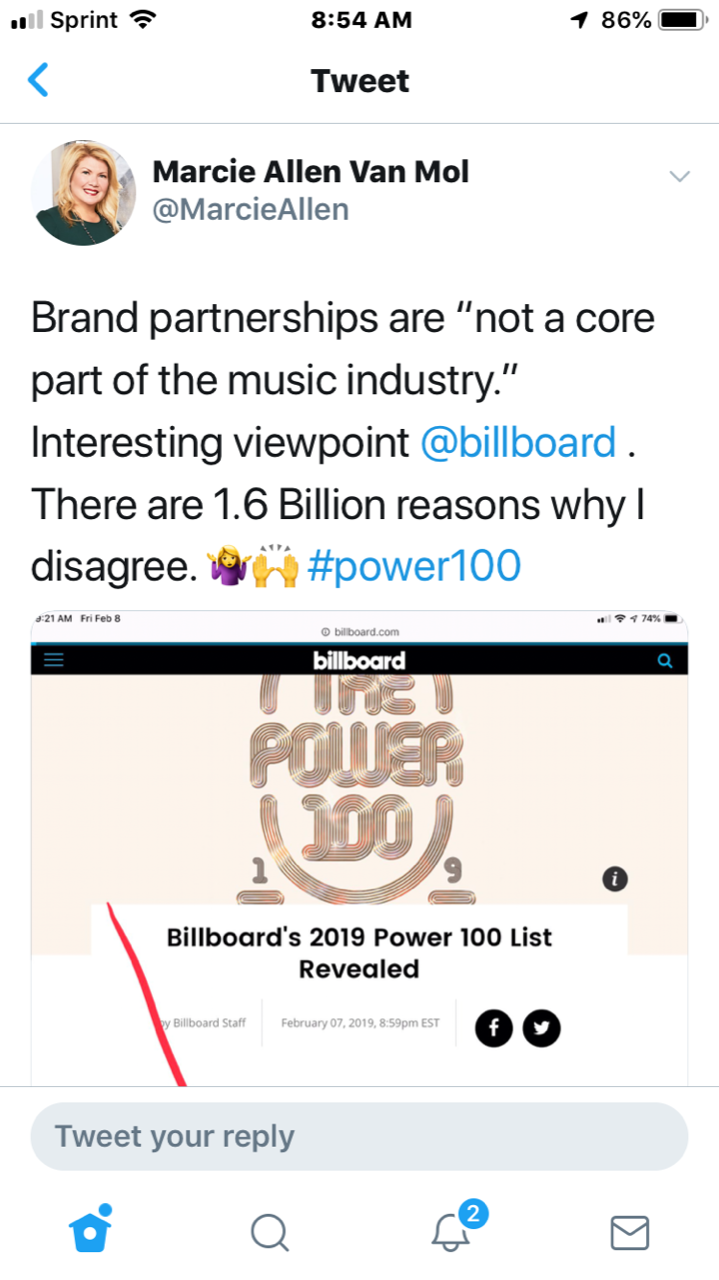 Marcie is an interesting person who is part of an unheralded section of the music industry.  Her focus is almost entirely on brand partnerships and sponsorship opportunities.  Listen to THIS INTERVIEW she did a year or two ago on the Promoter 101 podcast.

What do I think of the list?  I wrote HERE back in November that the world is still having a love affair with the recorded music side of the business.  Yes, if the music isn’t recorded, we can’t hear it.  And if we can’t hear it, we can’t buy a ticket to see the artist live because why buy a ticket based to something we’ve never heard?

But live music – that’s where the money is coming in for artists.  Remember, they get micropennies from streams.  The get percentages of micropennies from publishing and the PROs (while also splitting those percentages of micropennies with 2, 3, or 5 other songwriters).  To make a living, you need to get out on the road and tour, thus reaping rewards of the live revenue streams: a portion of ticket dollars (dollars, not micropennies), merch sales, sponsorships, VIP experiences…  So why is Universal Music and Lucian Grainge higher than Live Nation’s Michael Rapino?

Live Nation has a market capitalization of over $11 billion.   Universal’s value has been thrown around over the past couple years, as parent company Vivendi is apparently trying to sell 50% of the company.  Headlines have valued UMG anywhere from $25 billion to $40 billion.  Last month, it was reported HERE that the company was valued by Deutsche Bank at $33.25 billion.  The same report stated that Spotify’s current market capitalization is hovering around $22 billion (down from a high last year of $35 billion).

What does this mean?  There’s a lot of money in music.

If we strictly judge by valuation, Lucian Grainge deserves his #1 ranking.  Somebody send him a nice plaque.  But Spotify’s Daniel Ek should be #2 and Live Nation’s Rapino #3.

Here’s the prediction:  The 2020 version of this list will feature Liberty Media’s John Malone and Greg Maffei holding hands in the #1 spot.  Why?  Because it’s very possible that Liberty Media will not just acquire that 50% of UMG, it may also acquire a very, very large chunk of iHeart Media (which is currently working to exit out of bankruptcy; Liberty Media owns a portion of the iHeart’s debt already).

Meanwhile, its SiriusXM division just purchased Pandora.  With deregulation all the rage in Warshing Tone these days, the #1 (and only) satellite radio company, which just purchased the #1 online “radio” streamer,  purchasing a significant (if not full) stake in the #1 terrestrial radio company (and #2 online radio streamer) will get through government hurdles (probably on an international scale as well).

This could be Liberty Media in February, 2020:

But wait, there’s more.  According to THIS, Liberty Media is also interested in purchasing a large chunk of CAA (Creative Arts Agency), one of the big six agencies we wrote about many words ago.

Again, what does all of this mean?

The best part is that the music industry has value.  Don’t let anyone tell you it’s dead.  That’s old news.  The money-losing (on the recorded side) days of Napster are gone.  Streaming is here to stay (until it’s replaced by whatever comes next).  Recorded music is generating positive revenue for the industry.  Live music is growing.  Ticketmaster sells more tickets every year.  It’s a healthy industry getting healthier.  Which is nice, considering it was very sick for over a decade.

Final note about the top ten above.  Where’s representation by the agencies?  The list is dominated by labels (60%), tech (20%), publishing (10%) and artist management (10%)*.  Look at the full list.  The first agent mentioned is at #26, Rob Light, who runs the music division for CAA (FYI – for your information, not an agency – Rob Light is a former student of the aforementioned Doctor Esteban Marcone).  I kind of think that, if Rob is the #1 agent and if live music is as important as we think and know it is, he should be much higher on this list than #26.  And we should have some representation higher on the list by Paradigm and/or WME, ICM, APA and UTA.

It would be possible to write another 1,000 words about this list.  I urge you to look it over, click on the links and read about all of these people.  If anything, you’ll get a great sense of the different companies and sectors within the music industry.  You’ll probably get some inspiration too.

Yeah.  We didn’t know it either.  We’re at 201.  We recently uploaded our interviews with Jake Posner (see the pic at the very top), Atlantic’s Michael Parker, Live Nation’s Harvey Leeds, music biz attorney George Gilbert, Columbia Records’ Kari Keller, Ultra Music’s Miles Franco, and Catalyst PR’s Jen Appel (leave the last L off for savings).  Go and listen to everything on SoundCloud, iTunes, and/or Spotify.  You’ll be glad you did.