The Music Business: More Than Just The Big 3

The Big 3 Labels Are About To Make Some Noise

What do you think the article above (click on the Big 3 Labels headline) is all about?  (I pause while you say something intelligent out loud.)  Based upon the article’s title, I thought it was going to be all about the shift in the industry from recorded music to live, from physical to streaming, from record label-driven to agent- and artist-driven – and how the labels were going to surprise us with something we haven’t thought of yet.

It’s not about that.

I think the title is great.  It made me read.  But what I wanted to read, based upon the title, was not what I got (or we got, assuming we’re on this planet together and you read the article in the link).  The article is about the Big 3 – Sony, Universal, Warner.  But it’s more about the folks who run the Big 3 now, not where the labels are going.  Are the major label groups about to make some noise, meaning the industry is about to be shaken up by some strong business moves brought on by Sony, Universal and Warner?

In this long read, the future of the industry isn’t really dealt with until the final three paragraphs.  The major question is reprinted here:

As physical formats fade away, artists won’t need manufacture or distribution either. Stringer compares the record industry to a boutique store on the high street, tucked between megastores like Apple and Google. So what is a record label – or indeed a “music-focused entertainment company” – for?

What do you think the answer is?  The article comes to no major conclusions.  It states this:

There are many possible answers – A&R, curation, strategy, technological innovation – but the most important is a shift in perspective. The men who run the major labels are no longer patriarchs, but partners.

You really should read the article.  You do get a good sense of the three “men” who run the Big 3 now.  But a few points are skipped in this article that we should think about when “discussing” 2019 and beyond:

1)  The indie labels have a combined larger market share as Universal.  We don’t have full 2018 numbers yet, but in 2016, the indies had a market share 1.6% higher than Universal.  In 2017, that had shrunk to .1%.  Still, the independent labels, as a group, are powerful.  We tend to forget about them when talking about the Big 3. 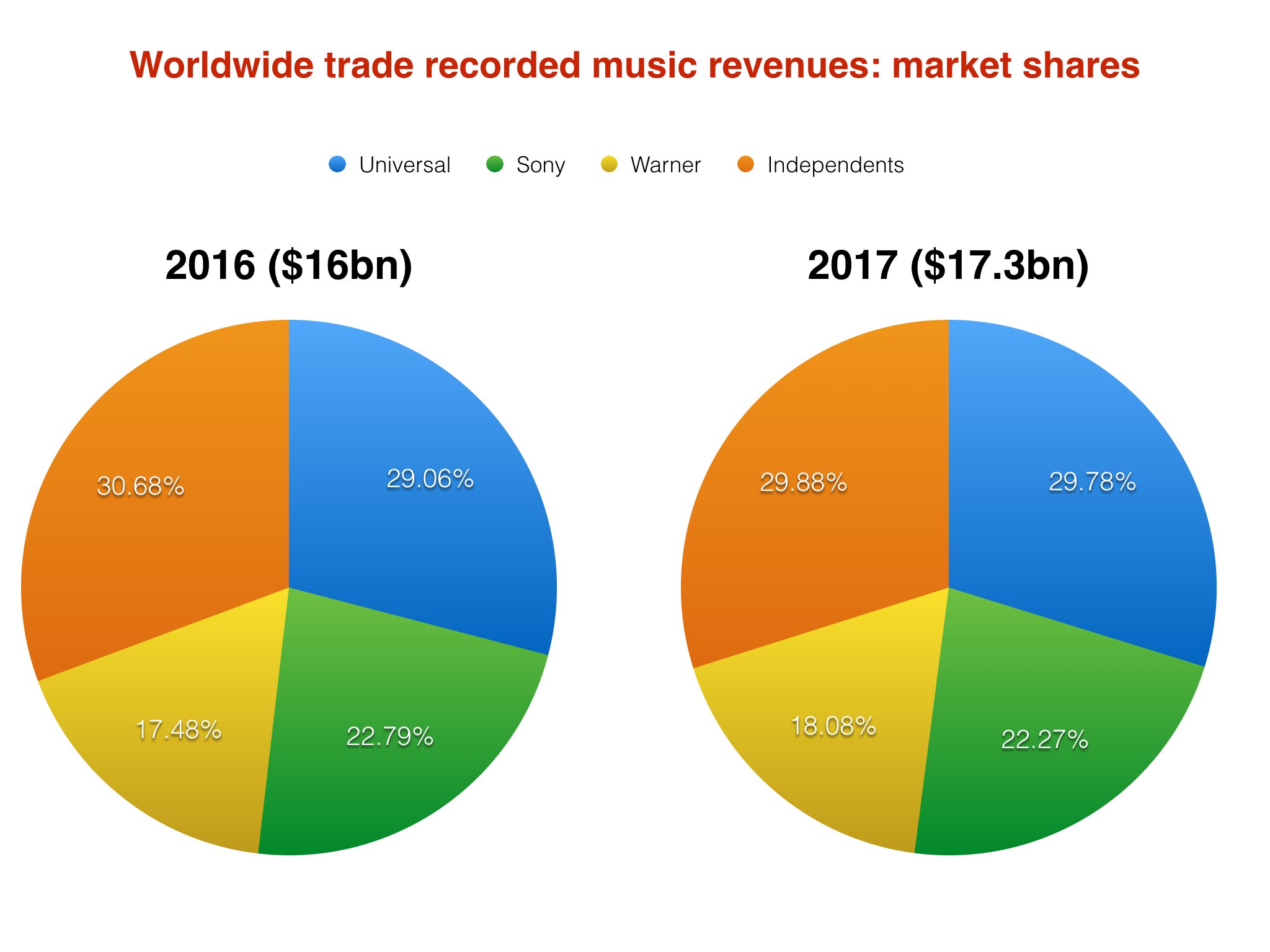 Concord’s year-to-date market share for albums, tracks and audio streaming is 1.56 percent, up from 1 percent a year ago, according to Nielsen Music. The company’s total revenue, with Imagem aboard, will reach nearly $300 million in 2017, making it the fifth-largest integrated music company in the world behind the three majors and BMG, with a total valuation of almost $1 billion.

3)  Who cares?  I don’t mean this necessarily as a dis on the recorded music industry.  It has come back after a decade of disaster.  But, if you were to look at the most important companies in the music industry, the list might look something like this:

This is just my list, but what do you notice?  Yes!  You’re right!  The live industry represents the #1 and #6 slot (note that #1 also owns #6; also note that AEG wasn’t included and probably should have been).  Slots 2, 3, and 4 are tech companies.  They aren’t even music companies.  They need music (Spotify much more than Apple or Amazon), but are not music.  I put an agency on there for #5 because the live industry doesn’t work without the agents. (And note HERE how Live Nation was one of the pants pockets filled with cash that produced A Star Is Born.)

Then, at #7, you finally see the first recorded music company.

If this was a pre-Napster world, Universal would be at the top.  But Napster did happen.  Those “what if?” statements don’t matter when an event occurred.  Sports is loaded with them.  “If the pitcher hadn’t given up 6 runs in the third inning, he’d have pitched a brilliant game!”  Maybe.  But he still gave up 6 runs in the third inning.  So, truth be told, he pitched a sh**ty game.  Therefore, Napster happened.  The recorded music industry suffered.  It bounced back and became profitable because of streaming.  But it was eclipsed by the live industry 7 years ago.

Why is all the focus still on major labels?  I feel that American musical artist culture is still rooted in 1998.  Or 1973 (when Springsteen first sang, “The record company, Rosie, just gave me a big advance!”).  We still idolize the major labels and we still need them.  But they aren’t truly as important in 2018/2019 as they were in 1998.  Pre-Napster, we still relied on the labels to break new artists on the radio.  Post-Napster, we have Soundcloud and Spotify and sharing via text messaging and DMs and Messenger.  The mouth in Word of Mouth is bigger and louder.  Chance The Rapper and Stormzy can be found and can succeed without the help of Universal, Sony or Warner.

But then again, there aren’t as many Chance The Rappers as we think.  If you glance over at the Spotify Top 50 U.S. tracks, which I just did, it was clear that 8 of the top 10 songs are directly signed to or distributed by major labels.  Looking deeper, the other two (XXXTentacion and Juice Wrld) are also major label related.  10 for 10.  Small sample size of one day, but that’s a collective 12,177,309 streams in that ONE DAY.

So where are we then?  I seem to be going in circles.

It seems that the chiefs of the major labels (I didn’t point out the obvious fact that NONE of the 3 major label chiefs were women or someone of color) are still important when it comes to streams.  But, based upon my personal list of industry importance, career longevity demands a strong live strategy.  The major labels are in the business of streaming micro-pennies.  The live industry is in the business of dollars.  An artist can survive on their percentage of a micro-penny only if those micro-pennies add up to many, many dollars.  An artist can survive a life playing on stage in front of audiences who pay dollars for tickets and buy some merch.

If you look at Stub Hub’s top 2018 tours from Memorial Day to Labor Day, you’ll see another kind of trend:

What do you notice?  These are not EDM acts.  These are not pure Hip-Hop acts.  These are Pop, Country, and Classic Rock acts; acts that exist because of their talent and live shows.  The Eagles date back to 1973.  U2’s first album came out in 1980.  Journey is an act that originally sprang out of Santana and Woodstock.  (And note that the Rolling Stones announced their 2019 tour last week; that’ll most likely #1 tour of next year, a tour promoted by AEG.) Even more interesting, only 2 of these artists are women; only 1 is African-American.

Does this mean it’s harder for women to sell tickets?  Is it even more difficult if you’re a non-white woman?  Again, this is a sample size of one summer, but it’s also a sample size of a little over 3 months and hundreds of acts touring across the United States.  (Hey – Another Note: In the current Top 10 streaming tracks I looked at above, only two songs feature women – Ariana Grande and Halsey – and the remaining 8 tracks feature African-American males.)

Circles.  We’re back to thinking in circles.  As I look at all of this and think about it, I think of the impending winter and the next snow.  Did you know that each snowflake is different?  Like a human fingerprint, every snowflake that has ever fallen has been different from the last.

I think we could say the same for artists in the music industry.  The success/failure rate for every artist, and consequently the independent and major labels they may be signed to, is based upon each individual artist.  Taylor Swift thinks differently than Bono (Swift’s big news last week was her NEW DEAL with UMG, thus leaving her indie, Big Machine, behind.).  Juice Wrld thinks differently than Pink.  That’s to be embraced.  The teams behind each artist need to think like this as well.

The path Radiohead took can’t be replicated.  Those doors are shut.  The moves they made opened new doors.  Your Radiohead-type act has to appreciate the past but think ahead.

The heads of the major labels, it seems from the main article, understand that the landscape is different today from 20 years ago.  They invested in Spotify and made hundreds of millions of dollars.  They understand the importance of touring and agents and merch (hence, their embrace of the 360 deal).

The system is complicated.  The dreams are as big as ever.  The more you know, the better your shot at lasting longer than the rest.