I’m trying something new. I’ve spoken to scores of artist managers over the past 5-6 years about what they do and how they work. Some manage, or have managed, top talent.  Some manage up-and-coming, major label/major tour talent.

But for all of the interviews and straight talk, I still haven’t been able to get a real, day-to-day grasp of what an artist manager does from wake up time to beddee bye time. (I put the “e” into “bye” because I’m thinking this “bye” is related to “good bye,” since, when we sleep, we’re saying “good bye” to our waking world and hello to Mr. Sandman, who has my consent to do to me whatever is needed for a sound sleep. If I’m wrong about that “e”, please let me know.)

I have been managing two artists for a year at this point (Zach Matari and Switch Mob). I’ve also been managing an event for six months (the DreamWalk Fashion Show). I manage full-time right now, because as a college music biz professor who does no professing from mid-May to September, I can. I have a company called Dadager Entertainment and my goal with this, therefore, is to fill in the gaps and spew out some real time, 21st century DIY manager stuff.

That’s what this will be, a weekly diary, loosely structured according to my weekly whims at writing time, that tells you what a manager does every day. Or at least what I do every day.

My artists don’t have 10 billion streams. They have day jobs and day dreams. They work hard at their craft. It’s my job to keep them organized, maybe keep them from breaking up, and help so that, in the future, they can make a living in music and entertainment.

And away we go…

Here’s something typical I have come to find for an artist manager. Just as I type, “And away we go…” I go to Spotify to play some background music. One my way to my player, I see that “Rain,” a new song by Switch Mob which I uploaded to Distrokid on Thursday, is now loaded to Spotify. On the Switch Mob Spotify For Artists page, I can now click on Submit A Song and fill out information that allegedly gets the song into the hearts, minds, and In Boxes of Spotify editors, who may add the song to a holy grail for artists – an official Spotify playlist. Here’s one of the pages: 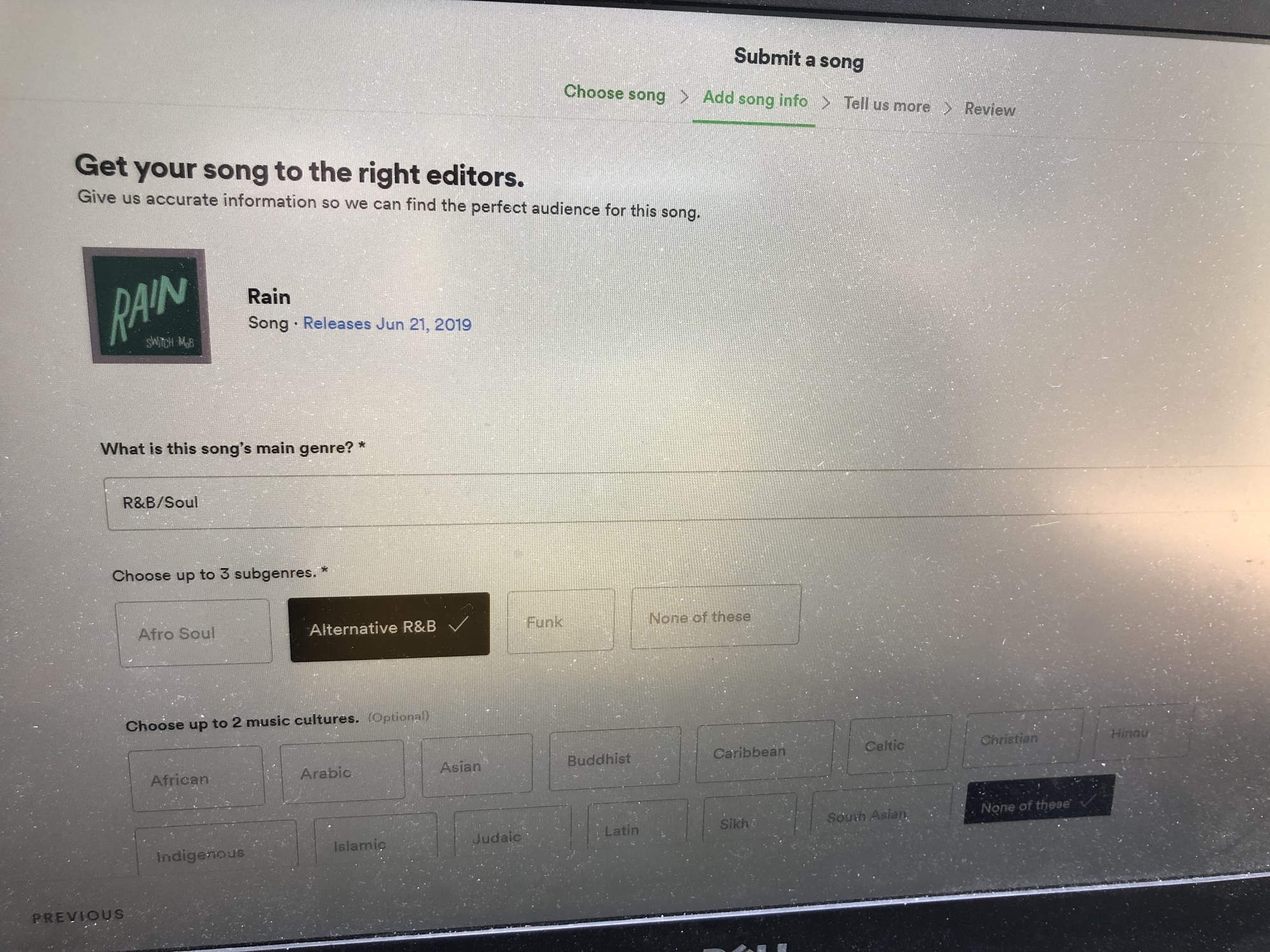 Everyone wants their new music on Spotify playlists. Why? It’s the new radio. I’m not going to get Switch Mob’s song, “Rain,” on Z-100. That’s the job of major labels and management companies with dollars to spend on staff or independent radio promotion people who have relationships that may get a song added into the finite number of slots available in a week.

Zach Matari has done a great job of making relationships for the past 7-8 years. His most recent song, “Dançando,” has been featured on 4 good Spotify official playlists because of his own connections. That helped the over all algorithm to the song, which was then added to some additional playlists. His song “Mirror” took 20 months to reach 200,000 streams. “Dançando” will only take 3 1/2 months.

Which brings us back to the day-to-day. I had to submit the song twice because I filled out the information, saw I wanted to add something else to a previous page, clicked on the Back button, and saw that all of my work had just been erased. Shit! I start again and lose another 10 minutes of my life that could be better spent helping my bands or reading about how awful the Mets are (I’m a big Mets fan, 6 foot 1 inch, and am sad about their 2019 season; but don’t get me started.)

I just now put on the background music I’d wanted because the “Rain” playlist submission process got in the way. That’s what happens for managers. You go to do one thing and then another pops up. Oh, here’s a pic of what the screen looks like once you submit a song to Spotify for playlist opportunities: 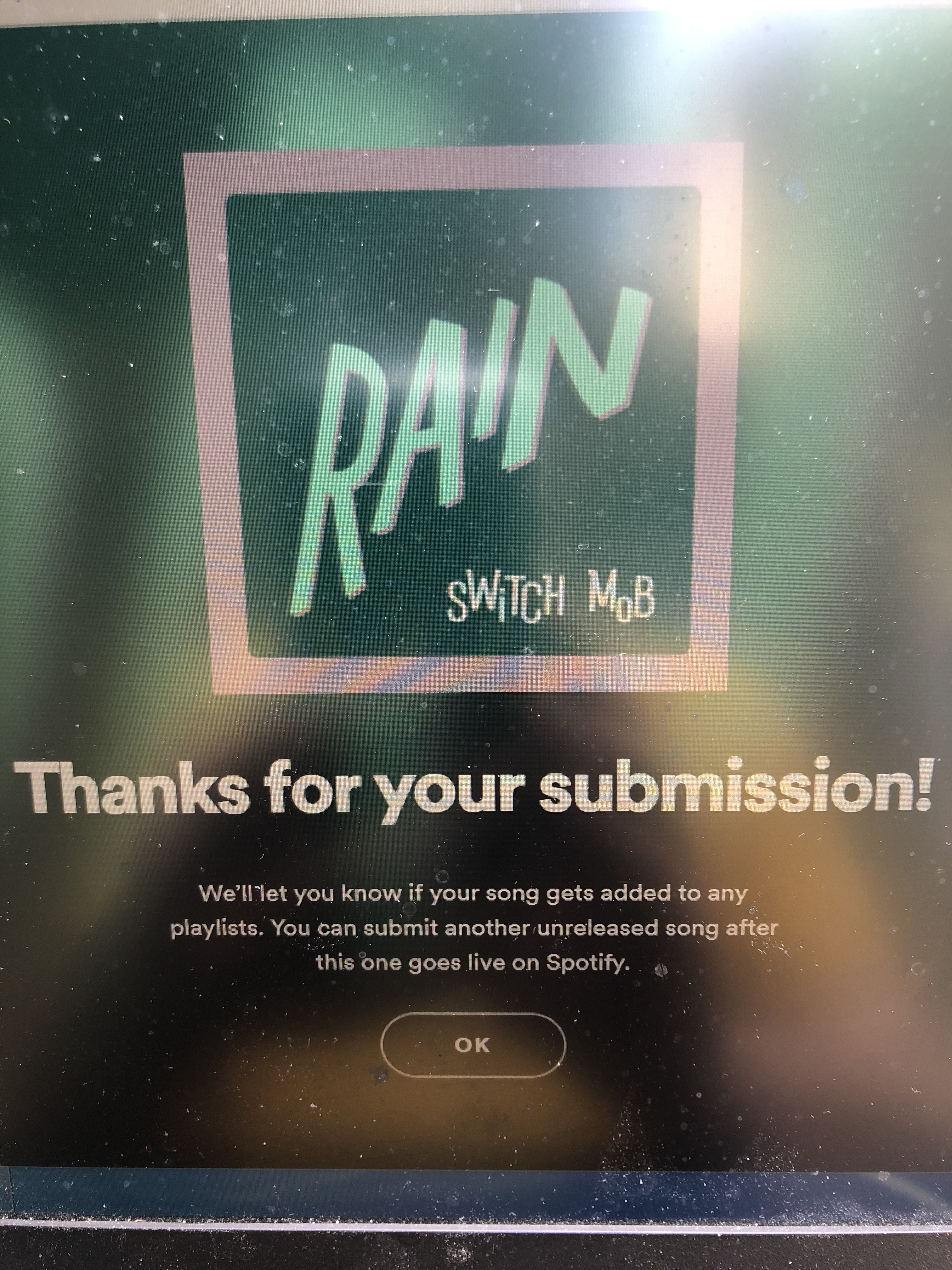 Here are some bullet points of what else I did today: 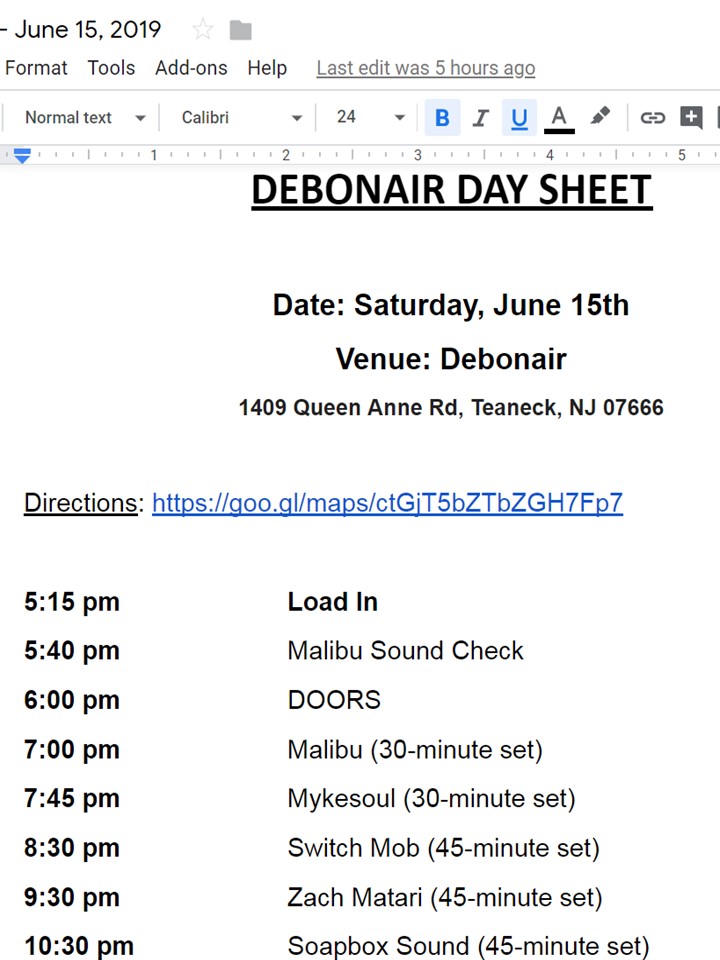 There’s more. Always more. But let’s stop here. Assuming I remember and have time to do this next week, you’ll have some more almost-real time info about what a manager does. And remember, people like Scooter Braun, who manages Ariana Grande and Justin Beiber, do what I do to the millionth power. I hope this little blurb help you figure things out or know more about what a manager does. See you in 7 days.

Professor David Kirk Philp is a dadager at Dadager Entertainment and Assistant Professor Music & Entertainment Industries and Popular Music Studies at William Paterson University. He is the co-host of the only FREE advice college radio-based music & entertainment industry talk show in America, Music Biz 101 & More, which airs live most Wednesday nights and is available as a podcast HERE every night (days too). Your favorite professor is also co-author (with Dr. Steve Marcone) of Managing Your Band – 6th Edition.  Reach him at PhilpD@wpunj.edu or find him on LinkedIn HERE.  The WPU Music & Entertainment Industries program is ranked one of the best by Billboard Magazine. Don’t believe us? Click HERE for truth!