This is an interesting article comparing live revenue to recorded music revenue.  It also compares the current era vs. “the old days,” which were really only about 10-15 years ago.  Read this quote:

“The reason the Weeknds of the world and the Drakes of the world are exploding is a combination of a global audience that’s consuming them freely at a young age [and that] they just keep dropping music…They’re delivering an ongoing, engaged dialogue with their fan base.” Live Nation CEO Michael Rapino 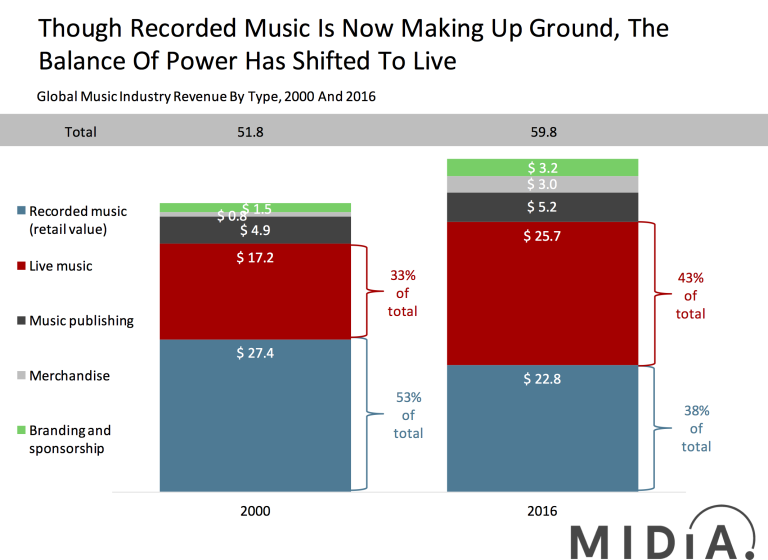 However, the article states, there may be limits to the growth of the live music industry.  It comments on the 2016 revenues of Live Nation, America’s biggest event promoter.  Live music is not a growth industry anymore.  It has matured and its gains come more from higher ticket prices now than incrementally more tickets sold.

So if streaming is on the rise, and it is, can recorded music catch up?  Can the old model of live music promoting the recordings, as opposed to the opposite current model, return?  Probably not.  Streaming rates are still too low.  And not enough people are subscribing.  The numbers are going up, fast.  But, if you read in a separate article HERE, more subscribers do not necessarily mean more money for artists (both writers and those who play on the recordings).

Some folks in the industry still say we’re in the Wild West of a new paradigm.  Maybe.  Or maybe the west was already won by the lords who came up with the original per-stream rates.  From an artist perspective, why would you expect anyone to offer to pay you more?  “Just because” doesn’t work here.